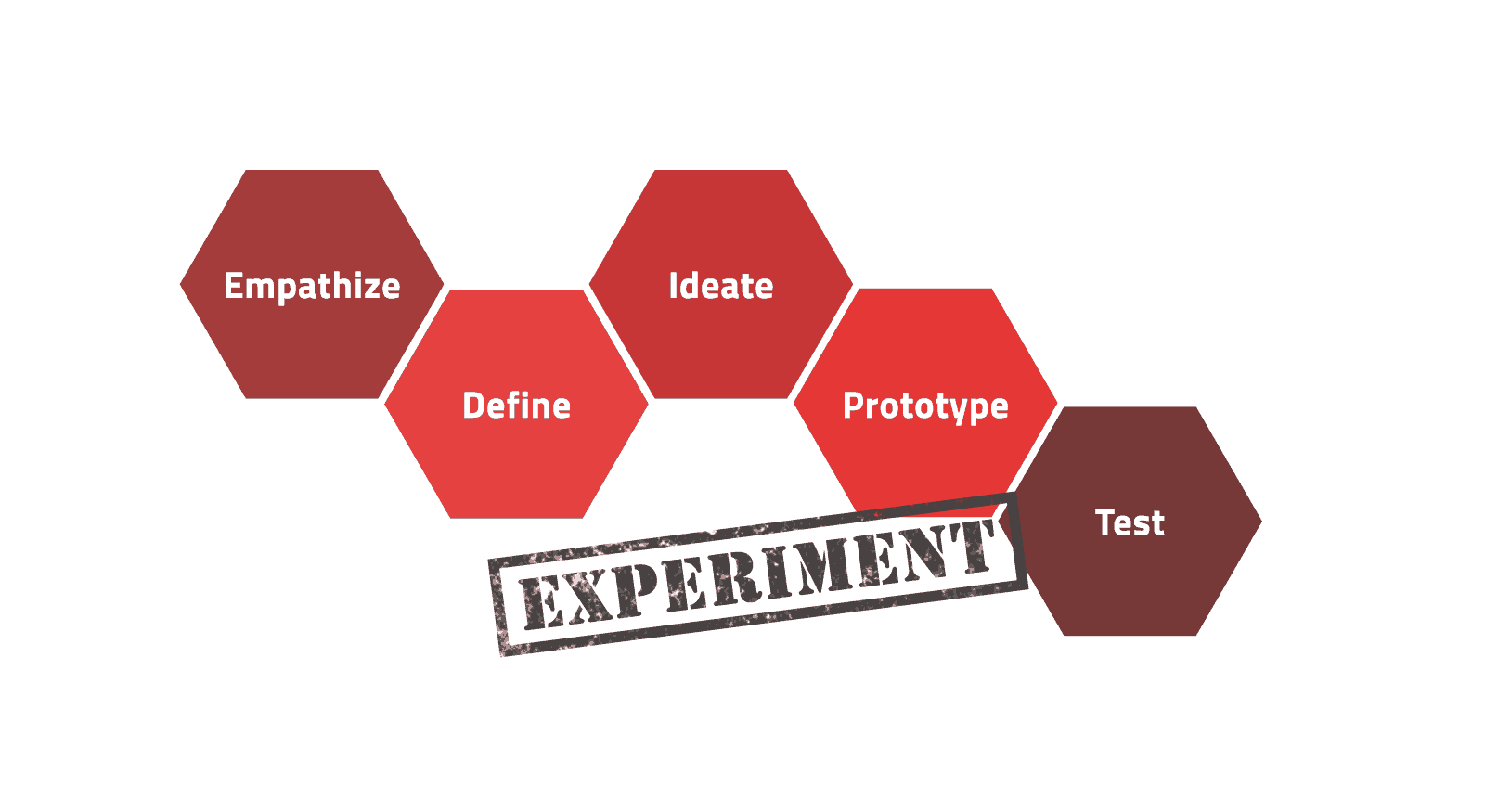 At coeno, we are always dealing with different creative and usability methods and their possible applications. During one of the last forays through the internet we came across the topic Design Thinking again. But even if the method sounds good in theory, you can't really judge it that way. Therefore, we were very enthusiastic when we found a virtual video crash course of the d.school from Stanford University of Design. Of course we had to try it out directly and now we want to tell you about our experiences.

The documents to try out for yourself can be found here.

Equipped with the printed documents, various materials ready to be tinkered with and the video on the TV, we made ourselves comfortable in our creative room. Of course it feels a bit weird, but the two guys leading through the video are quite likeable.

In the beginning there is the mission. In the video example it is the following: Redesign the process of "giving" for your partner. It starts with a four-minute interview with the partner to find out how this process of "giving" actually works. Anja learns that Maxi has already planned the birthday present for her boyfriend ahead of time. She has decided on a "burger cookbook". The design and style of the book and the recommendation of a colleague were the decisive criteria. However, she almost missed out on getting it in time, which is why she ordered the book quickly from Amazon.

We find the findings from a second four-minute interview even more interesting, in which the emotions involved in the gift-giving process are discussed in particular. Anja learns that Maxi is often stressed out because she doesn't know what to give her boyfriend.

The findings from the two interviews are now filtered according to the following two criteria: goals and wishes and newly learned about feelings and motivation. This is an intermediate step, in order to then derive the problem statement. In our case: "Maxi needs a little more input and encouragement to give gifts, because she gives her boyfriend something at least twice a year and still always wants to surprise him.

So far Jeremy and George have guided us well through the different phases and we have already learned a lot. What's especially good is that you actually get the feeling of being part of the workshop, because the video just keeps running during the work phases and shows how much time is left.

With the problem statement you now have a good basis to enter the creative phase. The goal is to sketch at least five ideas in four minutes and then present them to the partner in another four-minute phase, obtain feedback and develop the ideas together. Our favorite is the gift box with lots, where Maxi's friend can post his wishes on small pieces of paper and Maxi can draw a gift idea whenever there is an occasion. So Maxi gets support in the selection and a small surprise effect remains, because it is not clear in advance which slip of paper will be drawn.

The idea is now worked out in a sketch in three minutes.

Then we were asked to tinker. It is very unusual to work with scissors and paper, but the ideas become more concrete and solutions for possible problems can be found directly. The results are quite impressive, aren't they?

The finished prototype is now handed over to the partner and tested by him. The feedback is used to determine what is good and what could be improved. We got into a real flow, raised questions and developed further ideas. Maxi is quite satisfied with the result and is thinking about trying out such a box.

At the end of the video some questions invite you to reflect directly on what you have experienced. What we particularly liked about the process is that you develop an idea directly with the person who has a problem. Through the interviews at the beginning you get a good insight. A special experience for us was the concentration on the emotional level, through which one gets an even better understanding of the person and their motives. Through regular interaction with this person, the solution is tailored to the individual. However, in a real project with a larger client, we see some implementation problems because the decision-making processes are not as short and direct. By drawing and tinkering you get a better feeling of how the product actually feels and the solution becomes more concrete. This has also helped us to quickly improve and develop the idea further.

The experiment was a lot of fun and with a little more than one hour it is easy to accommodate in everyday work. So we can only recommend you to try it yourself.